The Image Recognition Technology Is, Usually, Associated with an Array of Security and Surveillance-Related Uses and the Rapidly Developing Autonomous Vehicle Niche.

Can Image Recognition Apps Help Businesses in Other Verticals?

With Reuters’ predictions for the not-so-far-off year of 2022 being in the region of a hefty $43-57 billion, Image Recognition is one big lure for AI outfits, and, simultaneously, a lot of hope for businesses and organizations that depend upon it for their survival and success. These include entities as diverse, as manufacturers of autonomous cars and security systems, national nature parks, border security forces, and companies that produce drones.

Be it monitoring the state of a much cherished rainforest or sending drones to remote oil rigs to check if all one’s assets are in one piece, almost all of the widely known uses of Image Recognition seem to be related to security and surveillance. Add the autonomous cars and a couple of medical uses and the picture seems to be complete.

Is that really so?

Are there any other related potentialities AI providers and businesses in verticals other than the above) should be aware of?

A definite yes. Why?

The ability of Image Recognition apps to capture miniscule constituents of substances and the transformations that are related to them adds to the range of uses of the Image Recognition technology enormously. This happens, first of all, because the quality of a number of production processes, and, consequently, that of the resulting products, hinges upon the quality and composition of several (sometimes, continually incoming) ingredients.

Sometimes, the quality of these ingredients has to be measured on the fly, which complicates matters a lot. And this is precisely where Image Recognition can efficiently come and give birth to a host of profitable opportunities. In many cases, an Image Recognition app can provide a much quicker and more cost-effective alternative to the corresponding legacy business processes of industrial companies.

Which industries can this be of interest to?

One can think of a few industries, whose businesses are likely to be interested in, or liable to benefit from the adoption of the Image Recognition technology as a means of enhancing their Quality Assurance-related business processes and rendering these ones more cost-effective:

To sum it up, although the specific approaches and algorithms may differ, one can presume that the ability of Image Recognition to capture processes inside substances makes it worthwhile to learn about the opportunities it creates for the above and other types of businesses, whose technological processes and product quality depend on the quality or amount of a bunch of ingredients or the related business processes.

Let’s now take a look at how exactly Image Recognition algorithms can help businesses in the afore-mentioned verticals optimize their Quality Assurance and cut the related costs. We’ll also draw on the hands-on experience of our experts to define the more optimal approaches to this rather complicated task.

The Quality Assurance tasks an Image Recognition app can solve vary widely but, inevitably, always share the same goal: determining the quality and/or characteristics of a substance by processing an image of this substance.

There are a number of methods that allow achieving this, some being more efficient than others at certain junctures. Usually, developing an Image Recognition app for QA purposes involves several Image Recognition methods.

The areas of production, in which production-related decisions are, frequently, made based on the state and characteristics of product ingredients, are many. The advent of the powerful modern-day optical equipment has made it possible to capture images of both solid (for example, clinker) and liquid substances that can then be used to perform these substances’ qualitative analysis.

In other words, it has become possible to analyze various substances in terms of the number of instances of their different constituents. Quite often, it is also important to determine the different characteristics of these substance constituents, or to monitor their performance and interactions during a production process.

For example, in Steel Production, the choice of the steel smelting approach is greatly influenced by the amounts of such admixtures, as magnesium, flint, sulfur, and phosphorus, as well as by the size and composition of the metal scraps, used in the smelting process. In the chemical industry, polymer is compounded with glass-fiber to produce fiberglass, - a fiber-reinforced plastic, used in the production of a wide range of products, including roofing, boats, aircraft, and more. The dispersion uniformity of the glass needs to be measured and controlled during the production process (and this is, incidentally, already done with the help of Image Recognition, and, more specifically, real-time X ray imaging).

The following is a real-life example of using Image Recognition to enhance the quality control process in a major cement factory (the project involved one of our senior AI experts).

The first three images in Fig.1 are those of solid substances, while the 4-th one is that of a liquid substance (Fig. 1d). The Image Recognition application was tasked with processing these images with the goal to determine the characteristics of the substances they depicted. 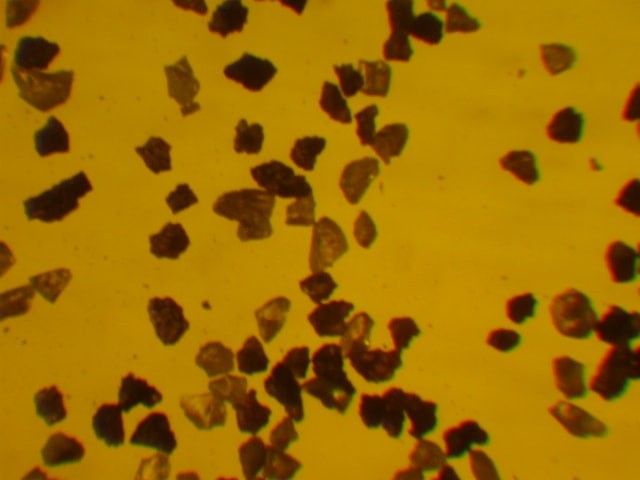 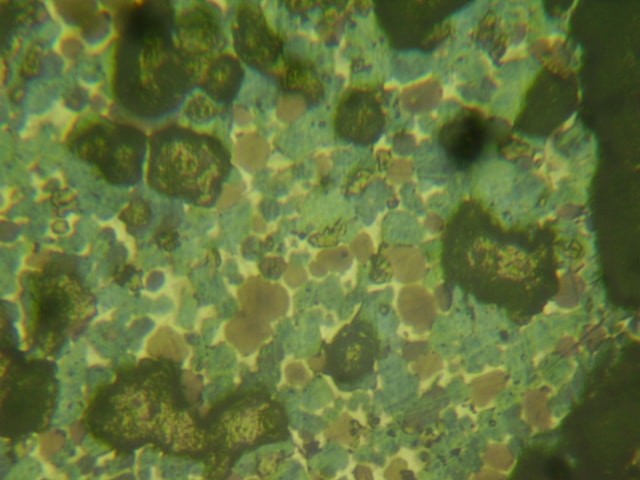 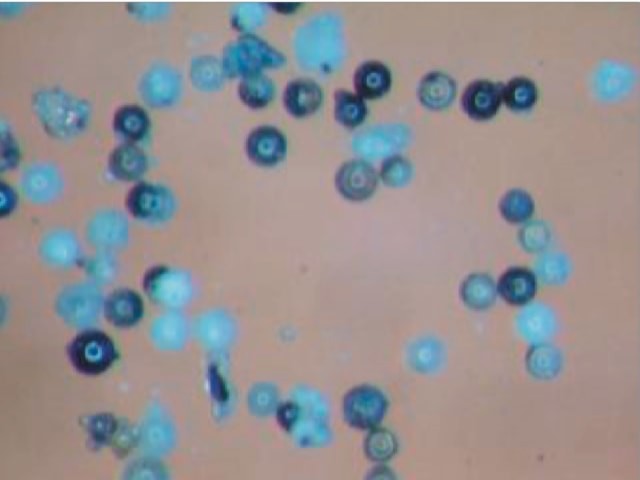 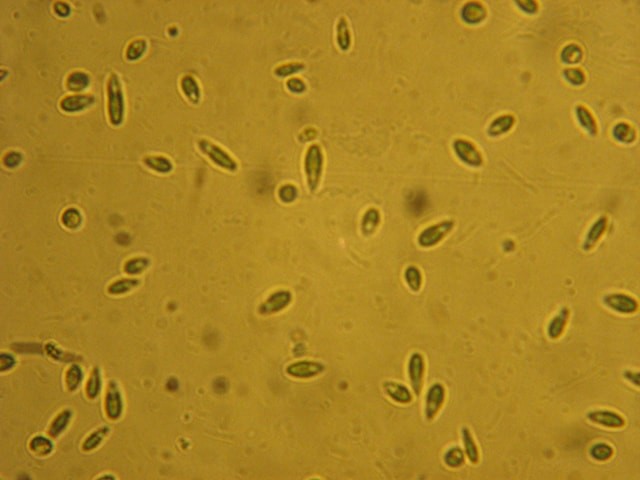 Fig 1, a). shows cement grains, and comprises the following objects:

Fig 1, b). shows enlarged clinker, and comprises the following objects:

The researchers exposed the seaweed cells to some toxic substances. As a result the seaweed cells changed shape, becoming circle-or ellipse-shaped. Also, they lost their mobility (entirely or partially) and their flagella.

The following characteristics of the seaweed cells were analyzed:

Additionally, one needed to calculate the percentage of those cells, which had changed shape.

During the research under review, a diverse range of such techniques were used, and they were used in an array of combinations.

Regardless of which of the substances was analyzed, no single existing method alone proved to be capable of ensuring an optimal and satisfactory result. Moreover, in each specific case a bespoke combination of several methods, composed specifically for this very case, worked best.

Fig.2 shows how an image, which depicts cement grains, can be processed using clustering (with a). being the original image and b). being the clustering result. 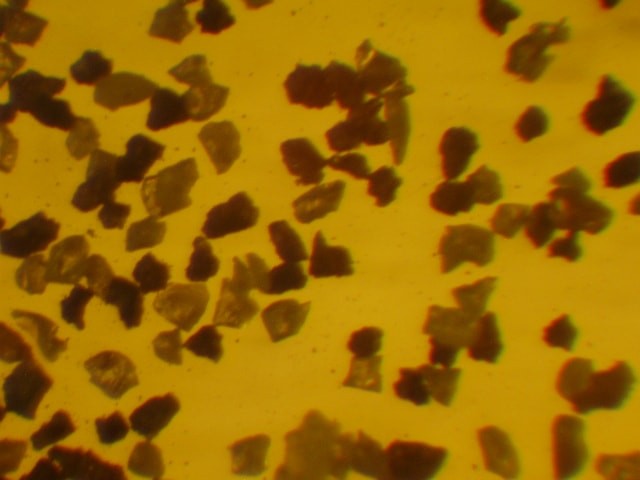 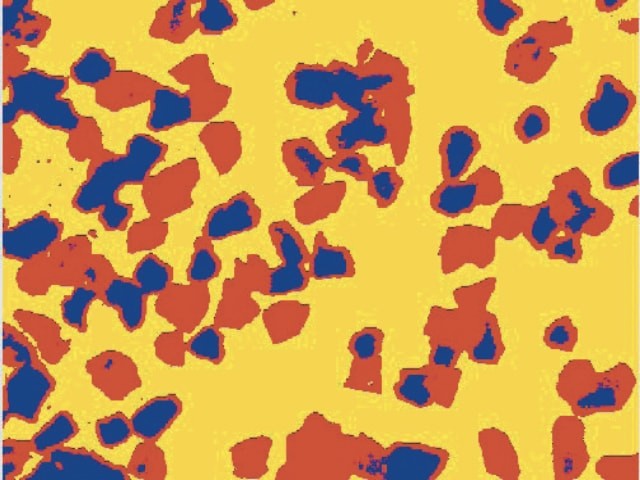 The blue spots signify clinker and the red ones stand for slack.

In Fig. 3, one can see the improvement that was achieved through the use of morphological and filtering methods. 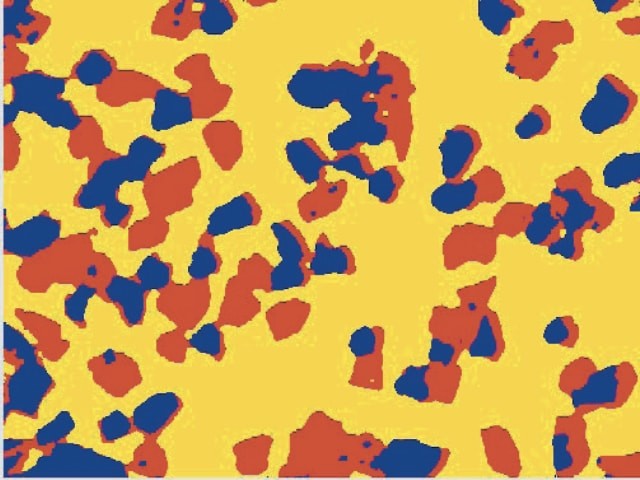 Fig. 4, shows how erratic the performance of a method or method combination can be: the same combination of methods was now applied to identify Pores, and this resulted in error. 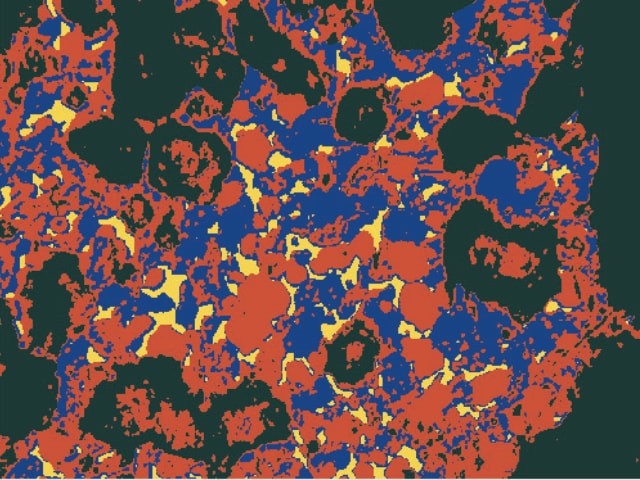 In order to resolve the above issue, the research team opted to use Laws texture energy measures for distinguishing the pores from the rest of the objects (Fig. 5), and this move was successful. 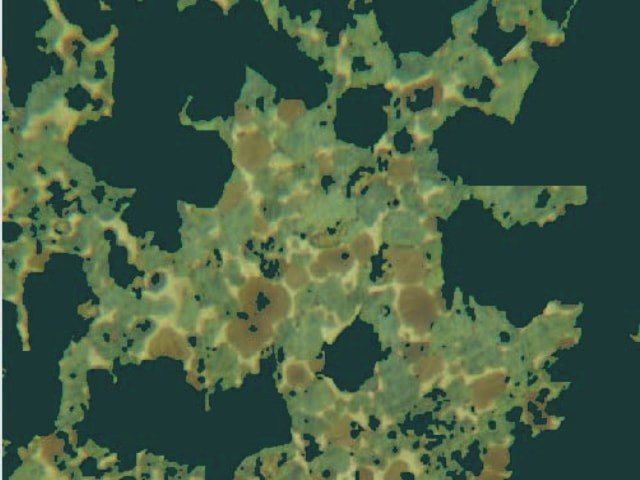 They also identified the rest of the objects by using methods that are, normally, used to identify ash (Fig. 6). 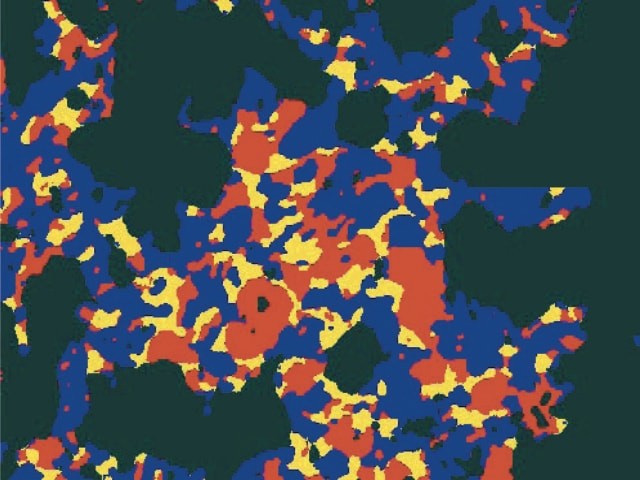 The Huff methods had to be added to the method combination being used for identifying circle-shaped objects in liquid and ash images (Fig. 7). 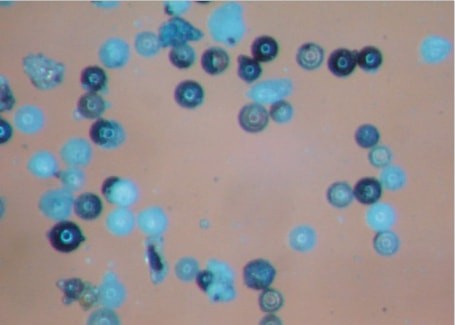 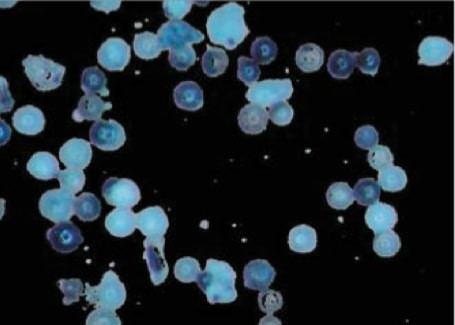 b) the selection of objects for analysis 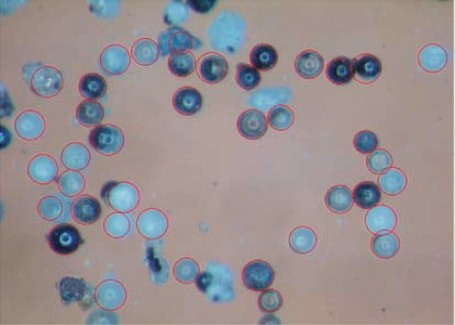 A modified version of the Huff method yielded a very good result when applied to determine the number of objects and to identify object contours in a liquid substance (Fig. 8). 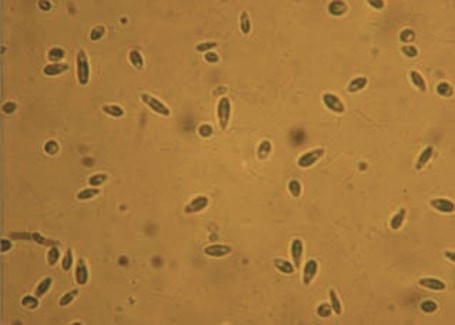 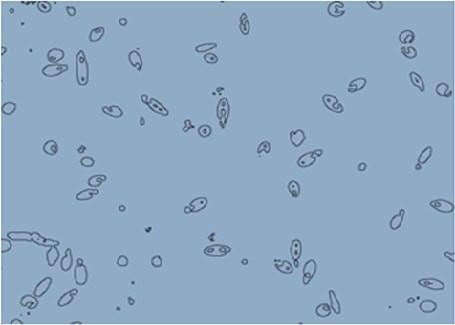 b) an area definition 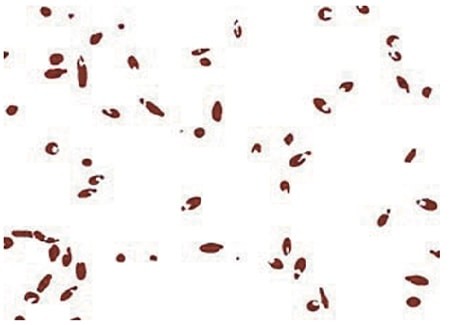 The above example illustrates just how complicated the Image Recognition process can get, and gives one an idea about the amount of skill and effort it takes to develop an efficient and well-adjusted Image Recognition system. Obviously, each image class requires a tailored approach and a well-calculated bespoke method combination for the analysis to yield a reliable and actionable result.

However, no matter how intricate and complicated the Image Recognition process and its implementation can get, the number of industrial applications of Image Recognition will, in all likelihood, be on the rise for decades to come. The reason for this is not only the mere technical impossibility of performing measurements with the help of any other method in a plethora of instances. The rapid adoption of Industry 4.0 is projected to create a colossal need for additional, more effective QA and production control means. Among other things, this will happen due to the Industry 4.0-generated possibility for manufacturers to cost-effectively produce smaller batches of products, and, consequently, a greater number of their variations.

All this spells a bright future for Image Recognition apps, their developers and clients of the latter alike. 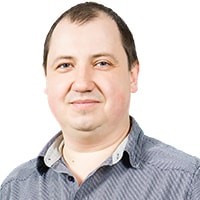 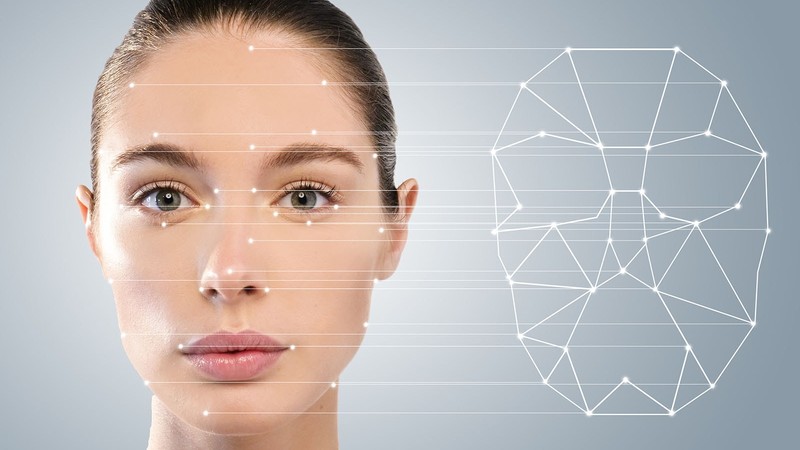 Face Recognition apps are likely to shortly impact profoundly an even greater number of industry sectors and business niches than they already have. 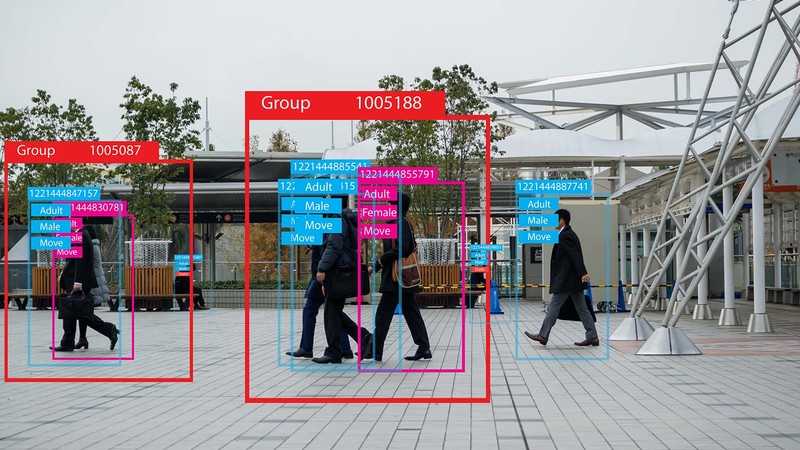 Facial Recognition: the Advent of a New Era in Non-Digital Marketing?

Facial Recognition is making inroads into Banking, Public and Corporate Security, and even, Gambling, equipping businesses in them with better means of control and security-related customer identification.

Industry 4.0: What Can Help Fuel the Change?

It is now time-proven that Industry 4.0 is not a mere high-flown concept, but, indeed, the near future of the economies of all industrialized nations.

What resources will this gargantuan change require, and...
Read More keyboard_arrow_right